skip to main | skip to sidebar

When this hand came up in a national championship, here are three natural auctions that ensued.

The second auction (at my table) went off the rails in the ambiguity between the attempt at showing extra values and lack of a club control in the right hand.
But both the other two auctions involved one hand bidding a slam on their own once partner showed 5-5 in the red suits. Fair enough, for when we start giving opener a hand with ten red cards, slam usually has reasonable play and is often cold.

Could South's assessment change if North bid a slow 3D ?

I prefer a 3S bid on the first hand above and 3NT on the second but is that universal ?
Posted by Sartaj Hans at 1:23 PM 13 comments:

This post is an attempt to tie a few odds and ends from previous posts.

a) Opponents interfere over almost every 1C opening.
b) Bridge has so little to do with bidding system.
c) Playing against weak players helps reinforce our prejudices.
d) Strong club is a lot of fun. Standard sucks.

2. Suit combinations we should know by heart.

For combinations 7 and 12, leading a small one away from the ace is better if opponents are known to always hop king from Kx.


3. Officially-disliked system by the WBF.

Ware-Whibley, representing New Zealand, submitted a forcing pass system called Crunch for the Bermuda Bowl. The system would be permitted only in the knockout phases. They were pressured by WBF officialls to withdraw the system before it was posted for the other teams to see. As far as I know, there was no greater reason than that such a system would be a pain for the Americans and Italians to prepare against. It was suggested that submitting such a system may jeopardize the two spots that zone 7 holds for the Bermuda Bowl. They were also informed, even before the appropriate committee had a look, that such a system would probably be disallowed on grounds of incomplete information. With two weeks to go to the bowl, the system was disallowed on grounds on insufficient disclosure for one opening bid. They were not given a chance to improve their documentation.

Why does the WBF bother pretending that HUM systems are legal?
Posted by Sartaj Hans at 3:17 PM 5 comments:

After years of playing natural methods, I'm trying out some strong club systems in the upcoming men's pairs, snot, nznats and gnot.

One thing that strikes me is how much simpler a big club system is, once you absorb the mechanics. We dont have the issues of two partners taking three bids each and neither knowing the high-card strength of their partner.

For example, this is a hand that tony and I bid (playing natural) in the Coffs Harbour. 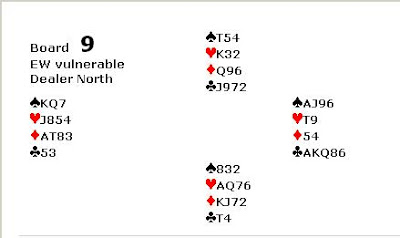 No one did anything terrible but we were miles away from bidding a vulnerable game. Two bids each and we could have had 11 opposite 6 points.


Strong club systems do come with their own share of problems, especially when the opponents interfere over 1C. One concept that I love is playing the strong club with a strong no-trump and a strong two no-trump. This is the style favoured by Meckstroth-Rodwell. It helps sort out core issues of game-versus-partscore in 1C- interference auctions a lot better than other stuff around.

The systems I am trying out are

Will try to post hands featuring our adventures and misadventures in strong club land here !

Also, a couple of days ago I taped an interview with Bobby Richman. When it shows up on this blog soon, I bet you will enjoy reading it as much as I enjoyed conducting it !
Posted by Sartaj Hans at 10:59 AM 10 comments:

Twelve suit combinations we should know by heart

We find ourselves in 3NT and need to take some tricks in this suit.
What is the best way of playing it ?

The comments to my previous post referred to the datums in the Bowl final.

Instead of banking on datums derived on the results of a match between two teams that were 100 imps behind with a set to play to the two big monsters of bridge, I've spent an hour summarizing the cause of 6+IMP swings and some potential swings in the final at a high level.

I do not claim to be exhaustive and completely accurate. Perusing through this write-up might be illuminating. Am happy to accomodate any dissenting opinions and change (parts of) this review.

Set1
1.Fantoni-Nunes bid a light vulnerable game that goes three off.
2.Fantoni-Nunes miss a 25 HCP game on a misfit that Meckwell make.
3.Nickell misdefends a slam that Fantoni was probably going to go down in.
Meckwell bid the same not-so-hot slam and go down
4.Katz makes a tight 3NT on a favourable lead. Meckwell defeat game on a different lead. The choice of lead had an element of randomness due to system issues.

Set 2
1. Nickell Freeman miss a vulnerable game
2. Sementa revokes as declarer in vulnerable game after taking a winning view earlier. Unclear whether Katz should find the winning line at the other table.
3. Nickell Katz have a bidding accident resulting in defending a doubled making partscore
4. Sementa Duboin bid a light NV game that comes home.
5. Katz takes a rash action to bid a noplay slam.
6. SementaDuboin and NickellKatz miss a cold slam that is hard to reach in a competitive auction.
7. Meckwell steal at favourable with combined 17 HCP. No game makes other way despite a good fit and a shortage.
8. Meckwell overstretch to vul game

Set 3
1. Meckwell make a slam after Fantoni Nunes get active,not unreasonably so. Hamman Zia pass and declarer does not have the vital clue.
2. Meckwell make a winning competitive decision while Sementa Duboin flounder
3. Meckwell bid a light vulnerable game that goes two off
4. Complex 1NT hand that Versace makes versus Meckwell while Zia goes down

Set 4
1. Lauria mis-saw partner's bid and bids a noplay slam.
2. Katz makes a daring lead directional bid that pays off winning a vul game swing. Fantoni Nunes go down while Meck makes against Versace Lauria on a random lead decision.
3. Meckwell bid to superior game contract knowingly so while Fantoni Nunes dont.
4. Versace opts not to make a light takeout double leading to Meckwell stealing a hand where the opponents could have made a game.


Set 5
1. Zia makes a reckless bid leading to a vulnerable penalty.
2. Zia-Hamman miss a light nonvul game that Fantunes bid and make versus Meckwell.
3. Meckwell and ZiaHamman both go plus on a partscore deal when Duboin opts not to make a light takeout double.
4. Fantoni fails to double an invitational vulnerable auction with bad splits while Zia-Hamman do.
5. Duboin misdefends a vulnerable game versus Zia
6. Fantunes "heavy"weak NT style leads to missing vulnerable game.

Set 6
1. Sementa takes a losing view in a light vulnerable game that Meckwell stay out of.
2. Rodwell takes a losing line of play in game that Duboin gets right.
3. Zia makes a rash bid (that Versace avoids vs Meckwell) leading to a phantom sacrifice.
4. Hamman Zia defeat a touch and go vulnerable game that Meckwell stay out of.
5. Zia-Hamman drive to the 5-level, down one, all on their own after a bidding accident

Set 7
1. Zia makes an unfortunate lead caused by Hamman's misguided bid. Then makes a questionable play to let through a game. Good play by Nunes.
2. Nunes takes a losing line of play that Meck gets right.
3. Fantunes miss a game due to systemic issues that Meckwell bid.
4. Meckwell bid the better game while Fantunes go down in their choice.
5. Lauria Versace bid a cold light slam that Hamman Zia miss
6. Meckwell are overboard in a vulnerable game.
7. Versace Lauria play superior game. Hamman Zia bid the more natural game that hamman takes a losing view in.

Set 8
1. Lauria Versace catch Meckwell speeding for a penalty
2. Meckwell miss a light vulnerable game that Duboin Sementa bring in.
3. Hamman Zia bring in a marginal slam that Versace stays out of.
Posted by Sartaj Hans at 9:57 PM 5 comments:

Sartaj Hans
If only I could play the game that I talk.